Prāṇāyāma (Skt. prāṇāyāma) is a Sanskrit word with the meaning of "restrain or control of the prāṇa (breath or life force), which is known as Chi in daoism and as lung in tibetan Vajrayana.

In the Yogasystems it is step 4 of the Ashtanga-Yoga. One goal is here to harmonize the five vayus  by harmonizing the prana and to transform the forces of the Prana-Kundalini, which has also effects on the astral body with its emotions.

Patanjali discusses his specific approach to pranayama in verses 2.49 through 2.51 of his Yoga Sutras, and he devotes verses 2.52 and 2.53 to explaining the benefits of the practice.

Step 4 of Ashtanga-Yoga is also step 8 of the universal path. At this step the dark prana-maya-kosha - forces ( svadisthana-chakra with the Prana-Kundalini) are cleaned and refined.  The daoist Qigong - exercises have a similar purpose but go finally higher up to the primordial Qi ,  similar to the shabda - pranava of the upanishads.

To master the Prana and for Nadi Suddhi (purification of Nadis) traditionally different methods are used and combined:

Vishnu's Matsya-avatar predicts the flood, and Satyavrata Manu flees with his family, many creatures and seeds in a ship. 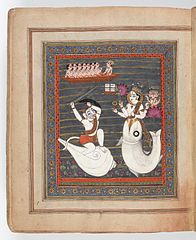 The demon Hayagriva (also called 'ajnana' : ignorance) acts as a flood-maker and opponent of Vishnu, who must be destroyed by Matsya, who eventually throws himself at him and kills him.(U.Path 7)

Matsya pulls the ship with the serpent Vasuki as rope to the mountain Kailash. (U.Path 8)

This story is equivalent to noah's deluge.