Krishna (Sanskrit kṛṣṇa, literally "the black") is according to the Mahabharata and the Bhagavata-Purana a son of Vasudeva and Devaki. However, Krishna cannot be proven historically.

In representations  Krishna is traditionally depicted with blue skin and yellow (peetambara) clothing. He always has the Bansuri ('Arrow of the Gods') bamboo flute with him and carries a peacock feather in his hair. He has a crown called 'Kiritina'. Krishna's nicknames include Gopala (Göpãla; Sanskrit for "keeper of the cows / cattle") and Govinda (who brings joy to the cows and the senses). He is also often shown together with a white cow. His Loka is that according to the Narada Pancaratra, the Garga Samhita and the Brahma-Samhita the Goloka ('place of the cows').

Krishna is mostly venerated as the eighth avatar of Vishnu, which gives Puranic narratives about Krishna as in the Bhagavata-Purana, in the Vishnu-Purana and in the Harivamsha-Purana an allegorical meaning.

Krishna applies to his devotees from the Purushottama and Paramatmapurusha to (exaggeratedly) the incarnation of Param Brahman. The tone of his flute is the call that seeks to transform the base and ignorant game of mortal life and instead establishes in him the purple of his divine ānanda.

In this context, Sri Aurobindo (or better the mother Mira Alfassa there) should be mentioned. She said of Krishna: "Krishna, the divine flute player, is the indwelling and unique divine and the supreme attraction. Radha, the psyche, the spiritual personality, answers the call of the highest flute player." (The Mother, Bulletin, Feb. 1961). According to Sri Aurobindo, the child (here Krishna) is a symbol for the psychological transformation in the heart.

== Krishna's career ==
Sri Krishna was born according to the Bhagavata Purana as the eighth child of Devaki and Vasudeva. He was thus a grandson of King Ugrasena. King Kamsa ('cup, brass'), was a son of King Ugrasena ('noble, mighty') and Queen Padmavati ('lotus owner'), and therefore Devaki was his cousin. Out of ambition and on the advice of his personal confidante Banasura ('arrow - demon'), Kamsa ('bronze, copper') overthrew his father and became king of Mathura. Krishna was saved from the wrath of King Kamsa, who after Devaki's marriage had been prophesied by a voice (allegory for the Shabda and the state of maturity) that the eighth child of Devaki would kill him, and who therefore wanted to kill Devaki and killed six of her eight sons.
Krishna was saved by his uncle Vasudeva over the Yamuna and then raised by a cowherd couple Nanda and Yasoda (symbolism of the two pillars - Ida, Pingala ). His brother Balarama was magically saved by swapping his womb with Rohini ('red cow'). So this story is a pure allegory: Krishna's birth and his salvation through the Yamuna through Vasudeva corresponds to level 14.4 and further to the first three levels of level 15 of the universal path. King Kamsa, the mind, represents rule over the kama-manasic powers. (He thus resembles King Herod, who had the newborn babies killed, and the baby Jesus can only be saved by fleeing to Egypt.)
The life with the Gopis in the forest of Vrindavan ('sweet fruits') and Mathura corresponds to the long lunar path of this samadhi step (U. Path 15). Radha symbolizes the transformed Kula-Kundalini, the higher personality,  - the Gopis are her controlling forces of the etheric body.
Krishna taught in Vrindavana ('harmonious life') to worship the herd of cows instead of Indra. The enraged gods sent torrential rain to wash away the mountain and the people of this land. Krishna held the mountain Govardhana ('feeder of the GOs or cows') up with his little finger for seven days to shield the people from Vrindavana. The astonished Indra then paid homage to Krishna. Allegory: The divine striving ('mountain') nourishes the pure all-transforming wisdom (GO), (Bhagavata Purana)
In vishnuistic schools like the Rudra-Sampradaya and the Kumara-Sampradaya the great love of Radha and Krishna is even described with a description of dances (parikrama, purple) of both, as an allegory for the last fifth section of this step: From an alchemical point of view, it is the Venus phase of this step that is represented there as a hermaphrodite or as Rebis. 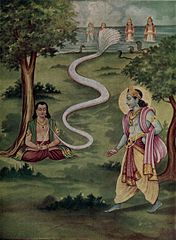 Later Krishna simply separates from Radha and enters step 16 with Dvaraka ('the multi-gate') and attains Ishvara - Samadhi, whose powers kill King Kamsa, the powers of the mind and their lower manifestations.
However, Krishna needs the support of Balarama to continue. Kamsas  eight brothers, headed by Kanka, were also killed by Balarama.
Krishnas forces are not quite sufficient for the Nirvikalpa-Samadhi. He dies before Balarama, who leaves later as a white snake into heaven (Bhagavata Purana 11.30.26) .
== Sadhana ==

Krishna's Bija in Gita are the letters  rk.  Other common mantras are

In the Sri Krishna Astottara Namavali  108 Names of Krishna are called.