Modern Astrophysics has various  cosmology - theories, and modern physics tries to explain the universe with the BIG BANG and a cosmic inflation. The big bang - theory teaches that there was  a temporary singularity out of which energy streamed (The Lambda-CDM model says about 13.8 billion years ago).

But the question is why  this region is preferred, and why is it the only region in the infinity of the space - except from the strangeness of that theory of cosmic energy out of a very small point, a  formation of matter, space and time from an original singularity. Thus, shortly after the Big Bang, the density of the universe would then  have exceeded Planck's density (the energy density would be nearly infinite. Therefore exists no generally accepted theory for the very early universe. 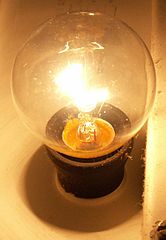 Hmm ... an esoteric explanation would be the creative omnipotence of God, which can also create a nearly infinite density, but I do not want to 'support' the materialists here ....

The cosmic microwave radiation comes after that model from the time about 380,000 years after the Big Bang. But the stream of infrared light, which was produced for a while, should have passed our region, despite from that the energie was radiated into a 3dimensional space, and therefore the amplitude at the outer parts of the universe should be very much weaker than in the center....

* The further problem is that only light out of the outer parts of the universe can reach us, which has been reflected from some 'matter'.

Other new theories are, that the expansion of the universe is connected with the shrinking of a parallel universe. Some modern directions of quantum theory  are based on this hypothesis(quantum universes).

At the time of Albert Einstein, when the possible size of the universe was not yet known, most physicians began to have doubts about the theory of a stationary universe. The background of these doubts was the model, that the produced light cannot be absorbed continously by the intergalactic gases und the cosmic dust, because after a time the absorption of energie must have lead to a plasmatic state which makes the absorption of further engergy impossible. The universe would then be filled with bright light. Thinking of the small amount of glowing matter in the universe and of the fact, that the light needs about 50 000 000 000 years to cross the universe, and that the light is send into a threedimensional space(in which it batters), the facts seem to be a bit different. Therefore the low brightness in the universe is not so unusual.

100 years ago modern astronomy began to measure the distance of stars and galaxys with special methods like the Leavitt-Relation and measurements of movement-vectors of very old light which arrived at our planet. But the composed vector of the movement of our watching position is not linear. Also the movement of the watched objects is not linear because of the overlayed circles of movements within the subsystems.

Therefore astronomy measures very old movement-vectors of old light and compares them with the momentary movement-vector of our earth which is completely different at our time, and therefore it measures false distances of a time-shifted redshift and a not really constant hubble constant( also : unclear discrepancy between H0LiCOW value 74 and Planck value 67). The Hubble-Lemaître-Law behind is based on the Robertson-Walker-Metrics of the relativistic cosmology.

But the linearity is only valid up to a redshift of z ~ 0.1 or equivalent to a distance of a good 400 Mpc. For more distant cosmic objects, Hubble's law no longer applies and a detailed cosmological model must be used in order to be able to assign a distance to a z. So the Hubble constant is actually not constant, but varies in cosmological time periods.

After corresponding (today still impossible) calculation of other distances the " dark matter " would perhaps be superfluous.

In Hinduism Vishnu created millions of spiritual universes (Brahmandas), out of which also our universe was materialized. In the Yuga-Theorie all this is periodically created and solved up again. The existence of the material worlds are just a moment in comparison with this period.

But inspite of the fascinating size of the universe it should not be overseen that we live in a world with the characterists of death and perishableness. The bright sun in the sky radiates a material light and is a fountain of pranic energies. Photos of the gases and stars within the universe hide these deadly characteristics.
Only the spiritual sun brings nearly eternal life, and it must be our goal to concentrate on this sun, which is infinite.