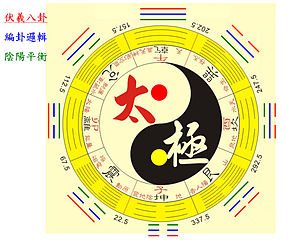 Modern Taoism had its origins in extatic schamanism. It developed first under the influence of Laozi and  of Mahayana towards true spirituality and inner culture, as it is described in the "Tao Te Jing" and in the Bàopǔzǐ. Another advancement during the Tang Dynasty were the Shangqing visualization techniques.  In addition, Manichaeism had brief influences in China.

Dào means literally 'way', 'road', 'path', meaning in the classical period of China 'method', 'principle' or 'right way', a bit similar to Confucianism with its outer culture. The highest Tao is the leading "sense" behind all things and in the area of the higher Nirguna Brahman of Adi Shankara and of the buddhist 'big emptyness' , which is similarly known in Daoism as 'Tàixū'.

'One cannot cognize Dao only by speaking about It.
One cannot name by a human name that Origin of the sky and earth which is the Mother of everything.
Only he who is free from worldly passions can see It; he who has such passions can see only Its Creations.
The Dao and Its Creations are One in essence, though called by different names. The passage which exists between them is a door to all the miraculous.' (Tao Te King, chapter 1 ) - The lack of passsions is of course not sufficient, but the spiritual development of the Zhenren.

The dao includes everything that exists. But through its work it does not merge into the existing."

'The five colours may blind the eyes;

The five tones may deafen the ears;
The five flavours may dull the taste;
Racing and hunting may madden the mind;
Rare commodities may prompt people’s illicit activities.
Therefore, The sage emphasizes the essentials of life, not the superficial temptations.
So he accepts this and rejects the other.'
(Tao Te King, chapter 12)

Dào is all-embracing  both the dualistic realms of the material world and the transcendence beyond the duality.
The Dào is thus both a principle of immanence and transcendence. It represents the highest state of being from the Taoist point of view. In its transcendent function, as an undifferentiated emptiness , it is the mother of the cosmos, as an immanent principle that permeates everything.

Similar to the Dao or just below is Wújí, which is translatable with "infinite", "summit of nothingness" or the "non-highest". Wuji can be understood as  an undifferentiated state of the universe, which represents pure potentiality, yet contains no differentiated objects and is also the origin of all objects. So Wuji refers to a formless primordal ground, to which everything returns. Wuji is invisible, unconditional, boundless, and featureless and incomprehensible.  From there comes  Wuji er Taiji  (Zhou Dunyi ) -  the two aspects of the one Li (the Absolute as the principle of the cosmic order of Zhu Xis).   A similar hinduist energy is Shiva who stands above Vishnu with his polar forces and waters.

In the sixth century China had, as already before at  213 BC at Qin Shi Huang, the problem of periodic book burning. In the eighteenth century the imperial government ordered all books to be collected and cataloged and it burnt 2000 titles. The Daoist books, however, were largely spared.

Mao Tse Tung tried to extinguish Daoism and other religious groups during the culture revolution, and  only six of the Shaolin monks survived. Today are again several thousand monks training Chan and Qigong in the Shaolin - order, to which the emperors permitted in the past to spread the Chan-buddhism and their Qigong-exercises in China because of their achievements.

The Daozang- canon, compiled on imperial command in 1409, dates back to the fifth century, when the three categories Lingbao, Shangqing ('highest purity', visual meditations) and San Huangwen emerged. It contains the canon of originally 1400 texts of scriptures of Taoist monks and masters. Therefore come most classical texts of the Daoist canon from later times.

The internal secret doctrine was always preserved orally in family traditions. Out of geografic reasons, the Taoism mixed up with the Mahayana buddhism(Chan) during the Han-period and then developed higher spirituality nd philosophies.

Lǐozǐ denotes Dào as an eternal principle of action or creation, which is responsible for the origin of unity and duality, and therefore for the emergence of the world (The "tens of thousand things").

From Taiji, the polarities of yin and yang, and thus the opposites, arise from the interplay between change, movement and mutual penetration, and thus the world.

Yin and Yang are one in Taiji, the most high. Taiji is an undifferentiated structuring principle that shapes the wholeness of the manifold things. Taiji is the source of all cosmic manifestations that emerge from the emptiness of Wuji.

From esoteric hinduist sight exist Jing and Jang in region of the polarities of Vishnu(trimurti).  Their lower equivalents in the lower worlds correspond with the polar electric and magnetic fluids of white magic(Fr. Bardon), which can be found in a modified form on all plains.

On the mental plane are the 'small Yin' and the 'small Yang' bound to the poles of this plain(Prakriti : buddhi - manas - polarity of the Samkhya - prakriti).

In Taoism they are often generalized on all areas and connected with food and plants etc..

The taoist Chi of the meridians of the acupuncture medicine is comparable with the Prana of the yoga. The Qigong exercises develop the Chi to support the Shen.

Therewith is Taoism also a path from the 'green dragon' (Prana) to the 'golden dragon' (Pranava on the buddhic plane), according to the practiced exercises, and then still higher with the spiritual Yin-Yang-forces.

The entirely negative aspects of the material-astral dragon are not mentioned in Daoism, with exception of the fire dragon in the 'Xingming guizhi'.

The material body is only indirectly influenced  with the means of 'Chi' and the above forces(Neidan). 'Chi' means in about "spiritual harmonizing power of purity" and it is effective against the negative powers of the dragon.  China knows several dragons. Their king is Long-Wang  who lives in a palace at the bottom of the sea. But this bottom has also the meaning of 'gate of death' and of an energy-point between the legs.

Another force is Shen, which implies a person's mental functions and consciousness, and which remains after death in the developed adept.

Taoism is therefore in the beginning a higher magic training(qigong). First exercises as described in "The secret of the golden Flower" ans some higher Qigong-Extercises prove the existence of higher spiritual scool with the goal of creating the "golden elixir" and the spiritual body ( Fashen 法身). The goal is the Zhen Ren - the truly enlightened.

The Taijiquan is counted to the internal martial arts practiced in China, where the Chi plays a significant role, but there are  dark and bright versions of Qi.
The chinese Shaolin became public because of their perfection in martial arts (Tao Lu). Shaolin has in his background the Qigong and the Neigong and the Chan(Mahayana). After the legend taught Bodhidharma the Shaolin Monastery the combination of meditation practices like Chan/Zen and the toughten up body movements 'Xǐsuǐjīng' (chinesisch 洗髓經) and 'Yìjīnjīng' (chinesisch 易筋經). Out of them were later the Shaolin martial arts developed as well as the form 'Shiba luohan shou'(chinesisch 十八羅漢手 ‚ The 18 hands of the Arhats‘). But Bodhidharma taught the fight unlike his Shaolin followers only as a complementary discipline to attain enlightenment(jap. satori; chinesisch 悟 wù; skt. bodhi).

Some directions of Taoism practice a kind of inner Alchemy(Neidan), which had parallels in the european alchemy of the middle ages.

The kernel of different taoist meditations are the practices of the "inner Alchemy" which enable processes of inner transformation.

Taoism t refers to the true Inner Child as the Immortal Fetus.
"Ten months the embryo (the European Filius Philosophorum) stands under fire. After a year, the washings and the baths become warm, says the 'Lung Yen Ging'.
The full achievement of the "golden elixir" corresponds the step of 16 the Universal path.

The five elements have however one in  Taoism a slightly different meaning, just like the dragon.
In some scools of Daoism is the merger of qi in the 'dantian' (energetic Center of a person) to produce a "holy embryo" (Shengtai), which gives the eternal life.

This fusion of the male and female forces(Yin and Yang; Fuxi and Nüwa, who is said to have been both the sister and the wife of Fuxi) has also been similarly described in the european Rosarium philosophorum (Frankfurt, 1550, Germany) with 'Gabricus and Beya' as

representatives of the masculine and feminine principle such as in the 'Xingming guizhi', what points generally on Chinese influences or at least a secret common knowledge of the initiates.

The small cycle (Xiao-zhou-tian) corresponds (naturally first in its full developed stage) with the step of 10 the universal doctrine (Spinner of the wheel).

The really fully unfolded large circulation corresponds  already with the step of 12 the universal path - comparable with the Ouroboros.

Shangqing - Daoism lends its attention on the Pole Star(Stella Polaris, Ursa Minor Alpha) and on the stars of the big bear  an others - as anticipation of the cosmic consciousness which is present in the Zhenren.

The Hindus allocate their seven aboriginal Rishis to a place in the big bear.

As prototyps or enlivening origins of the Seven Heavenly Men(the planetary Logosses) are those seven beeings regarded, who manifest through the seven Stars of the of the bear.(Alice Bailey; G.L. II. 668)

The book Leng Yen says: 'By collecting the thoughts one can fly and will be born in Heaven. Heaven is not the wide blue sky, but the place where the body is made in the house of the creative. If one keeps this up for a long time, there develops quite naturally in addition to the body, yet another spirit-body.'

But the Xian (hsien) is at most a magic master. First the Zhenren (chin. 真人, Pinyin Zhēnrén ‚True man') as personification of the dao, whom chinese Buddhism sees as an 'enlightened arhat', or better the Julai is a true daoist immortal, who realized his divinity through successful practice of the higher taoist practices and doctrines (the step 18 the universal doctrine)