The Prajnaparamita Sutras belong to the Mahayana Buddhist scriptures dealing with the subject of the 'Perfection of Wisdom' (of the other shore).

Why is there no obtaining of Nirvana? Because Nirvana is the realm of no "thingness." If the ego-soul of personality was an enduring entity it could not obtain Nirvana. It is only because personality is made up of elements that pass away, that personality may attain Nirvana. So long as man is seeking highest perfect Wisdom, he is still abiding in the realm of consciousness. If he is to realize Nirvana, he must pass beyond consciousness. In highest samadhi having transcended consciousness, he has passed beyond discrimination and knowledge, beyond the reach of change or fear; he is already enjoying Nirvana. The perfect understanding of this and the patient acceptance of it is the highest perfect Wisdom that is Prajna-paramita. All the Buddhas of the past, present and future having attained highest samadhi, awake to find themselves realizing Prajna-paramita. 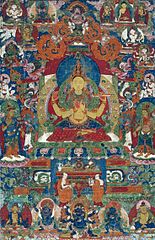 This mantra is for use in meditation or halfloud with a mala.