The Kaaba( also : Kaʿba ; DMG al-Kaʿba : cube‘) is a block-shaped building in the courtyard of the mosque (Masjid al-haram) in Mecca. It is considered the central sanctuary and the house of God (bayt Allāh).

According to Islamic accounts and according to Sura 22/26  the Kaaba was built  by Adam. But Adam lived far away and hardly had anything in mind with a Kaaba - not to mention the size of the Kaaba and Adam's tools at the time, and Adam's history is also an allegory.

The interstate ruin was supposedly rebuilt by Abraham (Ibrāhīm) with the support of his son Ismael in the order of God as a place of pilgrimage. But Abraham was a poor man.

When the worship of idols increased in Mecca, the image of the moon-god Hubal was placed in the Kaaba.  The origin of Hubal ('hu' : spirit; Bal : 'master') is not clear, but the name can be found in nabataen inscriptions in the north of arabia(:Corpus Inscriptiones Semit., Vol. II: 198; Jaussen and Savignac, Mission Archéologique en Arabie, I (1907) pg. 169f. ) together with  Dushara (ذو الشراة) and Manawatu (or Manat).

His red image was shaped like a human. The right hand was broken off and replaced with a golden hand. This hand may be a hint to the sufi-freemasonary exercises, which were published by Mr. Sebottendorff. Then Hu-Bal would be a kind of Yidam oder a Ishta-devata

Other tribes also added some 360 Djin gods in the mosque. The most popular deity was the female destiny goddess Manāt, who was also regarded as the wife of Hubal.

A second popular goddess was al-'Uzzá, who is also mentioned in Qur'an Sura 53:19.

The Nabataeans equated her with the greek Aphrodite Ourania (Roman Venus Caelestis).

These types of divinity were summarized as Al-lat (Allatu, Alilat, Alla, al-Lāt)

Herodot saw (Histories I:131) Aphrodite as their equivalent : ' The Assyrians call Aphrodite Mylitta, the Arabs Alilat and the Persians Mithra '(the wife of Mithras, also worshiped as 'Sol Invictus' in Rome).

The lunar deity Hubal was the chief god of the ruling Quraish tribe in Mecca over the 360 revered gods.  Here the crescent has its origin, which is still found today on the minarets and roofs of every mosque.

Hubal was famous for his seven arrow oracles. His image, made of red carnelian, stood in the Kaaba.

Hubal was soon provided with human attributes and depicted with a shortened right arm without hand. The Quraysh replaced the missing hand with a golden hand.

Hubal was also referred to as 'al ilah' (the god). The abridged version is 'Al lah'.

In the arabic language the specific article is attached to the noun and forms the word 'allah'.

The Islamic Allah, with his messenger Gabriel(Jibril), is, however, rather an attachment to the Jewish Merkaba, a precursor of the Kabbalah, in whose writings  several Rabbies ascended to the heavens, where they came together with several angels. Since god is the god of the whole universe, these soultravels have an allegoric meaning.

Muhammad later destroyed the statue and the worship of the Manāt alongside Hubal together with Imam Ali. He also expelled the Jews in Medina, who did not wish to accept his Quran doctrine. 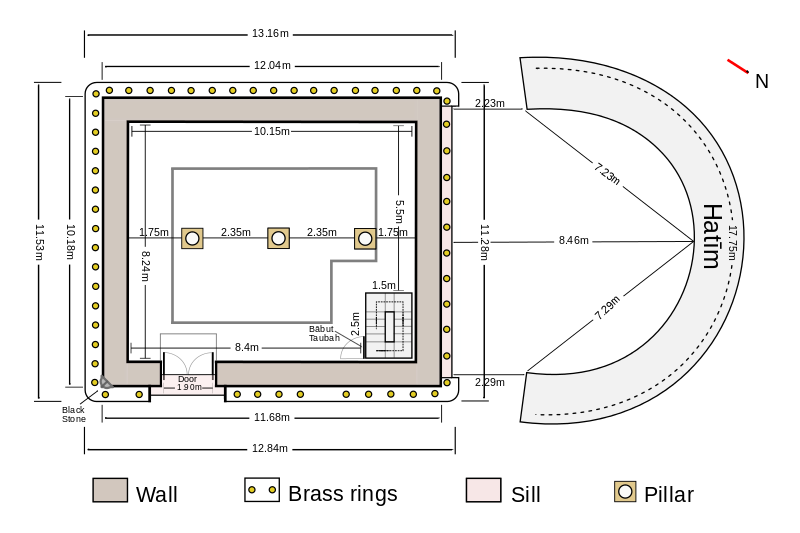 The Kaaba (Image from Wikipedia Author Bjankuloski06en) is located in the courtyard of the Haram Mosque Masjid-ul-Haram in Mecca. Nowadays, the Kaaba is covered with a black bridge (Arabic: Kisua).

In the eastern corner is a black meteorite. Otherwise, the Kaaba is empty except for three wooden pillars supporting the roof, and several gold and silver traffic lights hanging from the ceiling.

The Kaaba was bombarded with fire during fighting in the Caliphate in 692, and 931 the Black Meteorite Stone (Arabic: Hadjar-ul-Aswad) was dragged off to Bahrain by sectarians (Ismai-Shi'ite Qarmates). It was not until 951 that the stone returned to Mecca, through the mediation of the Ismailite Fatimids. In 1630 the Turkish Sultan Murad IV ordered a new basalt building.

In the chapter "The construction of Ka'ba by the Quraysh in the age of barbarism" (according to Peters[1]), the Meccan historian at-Azi-aqi (d. 834 CF) collected some of the traditions that still affect the early appearance of the house Respectively.

Before his extensive reconstruction during the early masculinity of Muhammad, some men of Quraysh sat in the sanctuary. They remembered the construction of Ka'ba, and they describe how it was before this time. It was built from dried stones and not with clay or mud. A door was on the ground floor, and she had neither roof nor ceiling. The curtain (Kiswa) was hung on the wall on one side and tied to the top of the wall. When one entered the Kaaba, on the right was a pit, where gifts of money and goods were stored for the Ka'ba. In this pit sat a serpent to guard them, which God had sent at the time of (tribal) Jurhum ....